Home » A Brief History of Gluten-Free Baking
« Go back 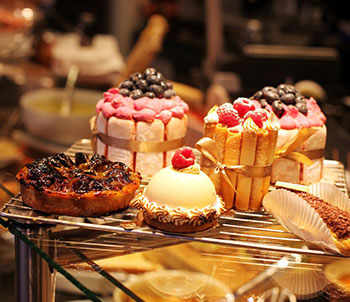 A Brief History of Gluten-Free Baking

Gluten-free diets are a relatively new phenomenon, and many have compared it to other fad diets of yesteryear such as low-carb diets. Why then has gluten-free baking only been popular in the past few decades when wheat has existed for millennia?

The cultivation of wheat dates at least as far back as the first civilisations, and as such much is known about this grain and others from carbon dating at archaeological sites as well as the genetic composition of today’s staple crops.

Wild wheat was first cultivated in prehistoric times and was the impetus for the agricultural revolution, transforming us from hunter-gatherers to the first city dwellers. Biblical sources point to wheat being consumed across the Fertile Crescent of Mesopotamia, such as in Babylon and the first city-states.

It’s possible that the characteristics of gluten were also well-known at this time, as unleavened bread was known to the Israelites. Gluten helps bread rise (along with yeast, of course) and gluten-free breads are therefore typically flat.

Wheat and other grains likely first arrived in Europe during the Bronze Age (3000BC-1200BC) and subsequently spread across the continent. Spelt became a favoured grain in Switzerland and Tyrol during the Middle Ages and proved to be a hearty and nutritious food for the peasants.

Although gluten-rich bread baking began to disseminate and vary across the continent at this time, it’s known that gluten-free flatbreads were also popularised as well, such as by the Ottoman Turks and by the communion wafers used by the Church.

The discovery of the New World led to a great exchange and transmission of agricultural products. Wheat was one such food introduced by Europeans to the Americas, where the native populations such as the Aztecs subsisted mainly on long-grain maize as their staple crop.

The birth of industry and factories resulted in new bread-making techniques, but it also meant that bread could be produced in mass quantities and consumed by a growing middle class, such as the gentry in England. It’s at this point that most people begin to consume wheat regularly and in abundant quantities.

Coinciding with the rising wealth of Western nations during the 20th century was an increase in the quantity of available food. The prevalence of wheat-based diets, however, also led to the first instances in which coeliac disease began to be diagnosed by medical professionals. It’s possible that the increase in wheat consumption in recent decades correlates with the rise in coeliac disease and gluten intolerance worldwide.

Since the start of the Millenium, gluten-free diets have become a worldwide trend, with many calling it a fad. Coeliac disease and gluten intolerance are real, valid reasons for which one should choose a gluten-free diet, but many Australians are self-diagnosing, with up to 30% of Australians choosing to consume gluten-free foods.

The Australian government recommends that gluten-free labelled products contain no detectable gluten. It’s a small yet important first step in ensuring that consumers are not compromising their health condition, much like warnings for peanut allergies or other ingredients that may cause anaphylactic allergic reactions.

At Gluten Free 4 U, we proudly bake great-tasting and healthy gluten-free products for all types of customers, even if you don’t suffer from gluten intolerance or coeliac disease. Our sweet and savoury baked goods include historic baked goods that are baked with modern techniques and quality gluten-free ingredients that often result in better taste!

16th August, 2019
Your Cart
There are no products in the cart!
Continue Shopping